Highlights of the Provincial Chapter XII 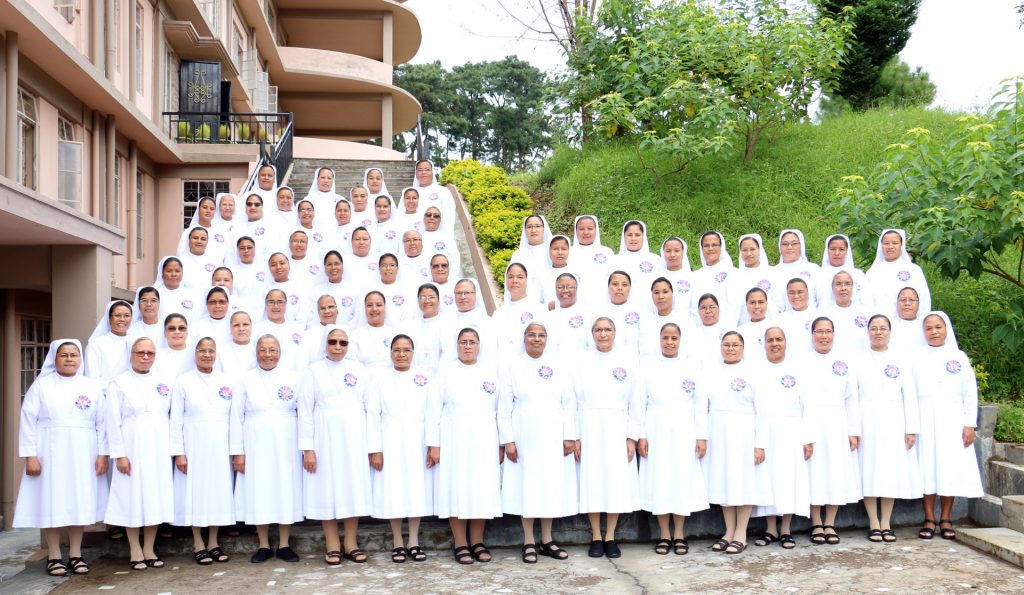 The 12th Provincial Chapter of the Immaculate Heart of Mary Shillong Province was held from 21-24 October 2019 at FMA Outreach, Lurshai – Lumshyiap, Shillong. 69 members took part in it which consisted of 35 members by right, 22 community delegates, 10 Province delegates and 2 invitees from the temporary professed Sisters. The theme that guided the assembly was “ Do whatever He tells you (Jn. 2:5) communities that generate life in the heart of our contemporary world”. The moderator for the Chapter was Sr. Celine D’ Cunha, general coordinator of the province and animator of Auxilium Agartala.

The first day of the Chapter witnessed the report of the state of the Province by Sr. Elizabeth George, Provincial; the financial report by Sr. Gemima Pohrmen, Provincial Economer and straight away after the clarification and discussion the participants took to serious work with Workshop I – “Reality, Emerging Cultures, Contemporary context and most urgent challenges for our communities”, which was done in region wise. After dinner, all went to St. Dominic Savio’s Church for the Holy Mass at the arrival of the mortal remains of Archbishop Dominic Jala from USA California where he met with the fatalistic accident and succumbed to death. The Mass started only at 11pm and the Sisters returned to FMA Outreach by one o’ clock in the morning.

On the second day, the Chapter members worked on Workshop II – “Pathways for a Fruitful Accompaniment and Choices for a Prophetic Missionary Spirit”, Workshop III – “Listen to the Voices” (Views of others on our life and apostolate) and the General Assembly of the following day in order to make time for the funeral of Archbishop Jala.

The third day’s work included Workshop IV – “What is calling us Today?” after which at 10am, the capitulars left for the Cathedral of Mary Help of Christians at Laitumkhrah – Shillong for the funeral of Archbishop Dominic Jala. On their return, the Sisters gathered for the General Assembly of the morning’s workshop from 7 – 11pm.

The central act of last day of the chapter was the election of the Delegate to General Chapter 24 and the substitute. With much prayer and recollection the election procedures went off smoothly and Sr. Celine D’ Cunha was elected as the delegate and Sr. Rosa Pyngrope as substitute. The afternoon session began at 2pm for the presentation of the Proposals, Vision Statement and closing ceremony, which was animated Sr. Helen Puwein and Sr. Euginia Kyntiewlin Susngi. During which Sr. Celine, the moderator proposed the vote of thanks to all who have been instrumental in making the chapter a success. On behalf of the capitulars, Sr. Bashisha Massar voiced out the sentiments of gratitude to the moderator, Sr. Celine. Another moment was dedicated to some fun and frolic with the presentation of the odd moments and the climax was the audio-video presentation on the glimpse of the 12th Provincial Chapter 2019 prepared by the social communication team. Sr. Elizabeth George, the Provincial in her concluding message encouraged all the Sisters to commit themselves to make the communities generators of life, never letting the wine of joy, enthusiasm and hope run short through a symbolic presentation of wine and a souvenir of PC XII for each community. Then, Sr. Elizabeth George, the President officially declared the 12th Provincial Chapter closed. Thus the historic event came to a close with a pledge to be “sowers of Prophetic hope” in one’s respective community.